Student News: Science and rafting in the Grand Canyon

The Grand Canyon needs little introduction. The national park is visited by over 5 million people each year from all around the world. The Grand Canyon is as deep and wide as it is unique. People have marveled at the unique geology of the Grand Canyon for centuries. The fascination for the canyon let to its designation as a National Park in 1919. Our trip to the canyon certainly did not disappoint.

Our crew consisted of graduate students, outdoor guides, and faculty all of whom are, or were, connected to the University of California, Davis. We began our trip, on cue with the now yearly pilgrimage, from Davis to Flagstaff, Arizona. A 13-hour car ride certainly allows for plenty of chatting. Although all the students knew each other from class, our friendships felt only professional and sterile for the most part. That changes quickly with a trip down the canyon.

After a night in Flagstaff, we made our way to Lee’s Ferry to put boats in the water. The boats were rented from Canyon REO (https://www.canyonreo.com/) and our guides were all associated with Outdoor Adventures (https://cru.ucdavis.edu/outdooradventures) at UC Davis. I was amazed at how much gear goes into the boats and down the Colorado River. I am used to backpacking trips where you pack as little as necessary. Instead, for these trips we packed everything but the kitchen sink, actually we packed that too. We had a full kitchen setup, all of our personal camping gear, boat gear, medical supplies, and two sets of bathrooms.

After gearing up the boats we camped in Lee’s Ferry for the evening. The next morning, after a year of planning, we were finally on the water. The year of planning is necessary as only 35,000 people are allowed to raft the canyon each year and this is determined by a lottery. Our trip has so many participants that we are usually able to get two permits (enough for our number of people). This year, the permits were drawn two days apart, so we had to wait two days on the river for the second group of students, faculty, and guides to arrive at the river. In those two days we mostly explored some side canyons, chatted about science, played some games, and simply got to know one another. With a brief pause in our trip waiting for the other crew, I will explain the point of the trip.

The rafting trip is essentially the final project for a seminar in the winter quarter. The seminar consisted of presentations by graduate students on topics related to the Grand Canyon. These presentations had two important objectives. First, we were each able to learn a bit about the Grand Canyon from our peers. And second, the presentations helped us develop our science communication skills. The students were in disparate scientific fields including geology, hydrology, civil engineering, and ecology. Therefore, we had to present with little jargon and focus on key messages. We received feedback on our communication skills during the class and throughout our time in the canyon.

When the second launch crew arrived we made our way down the river once again. First, however, we needed to do some safety drills. We had all received lots of guidance and tips about emergency situations on the river. Now it was time to put our knowledge to the test, sometimes a difficult think for academics who spend too much time in the ivory tower. One-by-one we each jumped into the river, like lemmings off a cliff following each other. Our task was to be towed by a kayak to a raft where we would pull each other out of the water. The drill was to simulate a scenario where someone fell out of a boat and needed to be pulled back in the boat. With good technique anyone, perhaps surprisingly, can pull anyone back into the boat. The scenario made me feel much more comfortable knowing people had practiced things a bit.

We then spent seven full days on the meat of our trip. Days were usually structured similarly, but no two were ever the same. Each morning there was a coffee/tea call around 6:30. On their own time people would slowly start drifting into the kitchen. Breakfast was usually around 7. The whole team then worked for the next two hours to pack up camp and get on the river. The group was great. Everyone jumped in to help one another. Once the camp was spotless, we made our way down river once again. We typically rafted for a few hours each day, in the range of 5-15 miles, depending on wind and our preference for campsites.

Rafting down the Grand Canyon gives you a very different perspective, quite literary, then simply visiting the rim. Starting at Lee’s Ferry we started in young rock (275 million years is young for geologists), the Coconino sandstone. As we traveled down river, we moved backwards in time, down through the geological layers. We would eventually journey into the Vishnu Basement layer rocks; these are on the order of 1.7 billion years old.  The layers are a perfect example of why learning in this atmosphere, as opposed to a classroom or textbook, is so important. It is one thing to memorize what some layer looks like in a book. It is a very different task to identify layers in person, as evidenced by the trip geologists often arguing about it.

After a few hours of rafting we either stopped for lunch or made our way to the next campsite and had lunch there. The best lunch spot had to be the Red Wall Hole. The name is quite fitting. As we turn around a bend in the river, a giant hole appeared in the wall of the canyon. The hole was large enough for a group of 10 people were able to play Frisbee. The spot was also perfect for finding fossils, doing some rock climbing, and baking in the sun for a few minutes.

In the afternoon, we typically went on a hike. It is difficult to choose which was my favorite. One such hike was up North Creek. As we moved up the canyon we discussed various hydrological and ecological observations. We continued up the side canyon and the walls started to narrow. The canyon’s walls only grew weirder from there. The beautiful layers we were used to seeing disappeared and rocks seem to point in all kinds of crazy directions. The canyon walls themselves started folding into one another, almost forming a pipe of rock. We spent a lot of time discussing how exactly this could happen. In very very short detail, the creek cut right through rock that was just perfect in composition to cause the weird patterns to occur.

The rafting and hiking usually ended around 5pm. Then, someone would muster up their best Bill Nye impression with a call for SCIENCE! At this time, several people each night delivered presentations on some aspect of the Grand Canyon. These were always interesting and engaging, especially given the backdrop. Often these conversations continued informally through dinner and the rest of the evening. People were, not surprisingly, excited to talk about more controversial topics. For instance, how do we best manage the Grand Canyon into the future.

Unlike the second half of the trip, we did not have a lot of big rapids. Our biggest rapid came on the last full day of rafting. The mood in camp that morning was focused. Everyone, in particular the guides, was focused on the day ahead. Our test came at Hance, an 8 out of 10 on the canyon’s rapid scale. I joined Larry’s boat on this day. Informally, he is the captain amongst the boat guides and goes through each rapid first. Therefore, we did not know what to expect, except that which the guides could see during there scouting. We entered Hance on the clean tongue of the rapid. Then, the huge hole emerged. We were to go right through it. Water went straight over the bow and over my head. After a moment, and realizing we were all still onboard, cheers erupted. Wow. We just did that. We then watched each successive boat make it through the rapid successfully.

Our journey ends with an 8-mile hike out of the canyon at the Bright Angle Trail near Pipe Spring rapid. Only some of the boat guides and staff will continue to meet up with the second half students. The hike itself acts a bit like rewinding a video. We rafting down the canyon going from young rock to old and reverse the pattern on the way out. The 8-mile hike climbs quickly and soon we can barely make out the river. Eventually, we just awe at how far we had been through the canyon. After two and a half hours a number of us make it to the canyon rim. We are greeted by tourists hiking around with no water and instead a Starbucks. It is a surreal experience reemerging in “the real world”.

Upon my return to Davis many people ask: what was the best part? At first, I thought this was a difficult question. The Grand Canyon is an immense an incomparable beauty. The size alone is awe-inspiring, let alone the geology itself. The immense power of the Colorado, despite the upstream dam, is also impressive. The river, of course, makes the rapids and rafting as fun as they are. Despite all of these wonders, the people are what make the trip. It is not a difficult question. The people I spent 10 days with were the best part of the trip. I would spend 10 days with this group of people wherever. I learned so much from this group, had some great laughs, and we all shared this once-in-a-lifetime experience. And best of all, we all get to go back to Davis and still be friends. 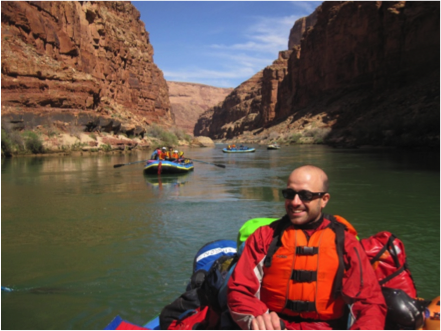 You can find additional information about the Grand Canyon course here: http://grandcanyon.ucdavis.edu/

Being a Good Ally: Lessons Learned at a UC Davis GDOPx Workshop

Resources for Teaching Ecology and Evolution